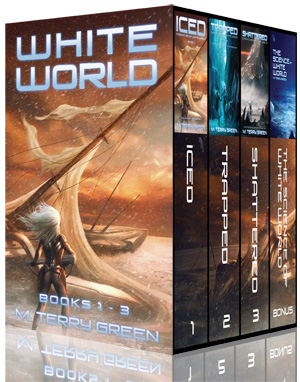 ICED (Book 1)
A frozen planet. An impossible quest. A sister who won’t quit.

“Spine-tingling, breath-holding action!”
“I am sure there are finger indentations in my Kindle.”

Though she doesn’t know her real name, Thirteen is sure of two things: survival and finding her sister. Nothing stands in her way—not the great Pacifica Ice Sheet nor the slavers she escaped—until her deadly hunt takes a maddening turn.

The first and only clue in her search is held by the survivor of a wrecked ice ship. But he’s not sharing. He has a daughter to rescue, and he needs Thirteen’s help.

In the unforgiving subzero, a wary alliance is formed. Although she’d do anything to find her sister and finally know her own name, Thirteen never forgets the first rule of the ice. You only get one mistake—your last.

TRAPPED (Book 2)
Surrounded by enemies. Nowhere to go. Out of time.

SHATTERED (Book 3)
A deadly end to a daring journey.

“I couldn’t stop reading until I reached the final page.”
“The final book will knock you on your backside.”

It’s the moment that has haunted Thirteen for years: the rescue of her sister. But as she, Cord, and Miyu enter the brutal world of the volcano city, it’s nothing like she’d imagined. Buffeted by cruelty more bitter than the Devil Wind, Thirteen must learn a new rule: find the truth before it finds you.

Shattered is the third book in M. Terry Green’s White World trilogy, a dystopian, science-fiction thriller. If you want a story of harsh survival, breathless escapes, and the young woman with enough courage for both, the White World series is for you.

Have you every wondered how a boat can sail faster than the wind?
Can a world like the frozen planet of the series actually exist?
What do they eat on White World?

These questions are the top three that readers ask. Now you can get an exclusive peek under the science hood of this exhaustively researched and intricately built series.