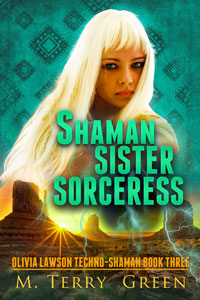 If techno-shaman Olivia Lawson thinks a trip to the Hopi mesas is the escape she needs, she is gravely mistaken. Abducted from her tour, Livvy quickly discovers that all is not as it seems in the quiet villages.

Formidable shamans draw her into a bitter and centuries-old conflict. While Livvy struggles to do what’s right, she can’t help but pursue an unexpected chance to be with the man she loves.

But as prophecies turn deadly, even the gods of the Multiverse play their part and Livvy must choose–between this world and a new one, between action and acceptance, between duty and desire. With all existence hanging in the balance, Livvy finds that, where choice begins, innocence ends.

“An escalating saga of the razor-edge balance between lives and worlds, innocence and guilt, armistice and total war, Shaman, Sister, Sorceress is a thoroughly engaging read, ideal for fans of fantasy with a modern twist. Also highly recommended are the previous novels in the Olivia Lawson Techno-Shaman series, Shaman, Healer, Heretic and Shaman, Friend, Enemy.” – Midwest Book Review

What Readers Are Saying About Shaman, Sister, Sorceress:

Shaman-tastic! I have just finished the third Techno-Shaman novel and can only say wow! A brilliant series, neither mystery, sci-fi nor fantasy but a page-turning concept blending all three with a fluid storytelling style. Looking forward to more adventures of Livvy and SK in the multiverse.

Absolutely Fantastic – Best One Yet! The author has written one of the best fantasy series I’ve had the pleasure to read. Her blending of folklore and fact is seamless and the multiverse is an absolute gem of her imagination. Her attention to detail brings the characters alive. You feel every emotion that Livvy experiences–her fears, her longing and her determination to right an ancient wrong. I can’t wait to read what Ms. Green has in store for Livvy and SK next. Highly Recommended.

An enthralling story with heart-stopping suspense, a topic so unexplored, and realistic, grounded, could-be-you characters. Not only highly imaginative, but also absorptive into a whole new urban fantasy world, this third installment of the Olivia Lawson, Techno-Shaman series is an exciting, fascinating continuation of Livvy’s shamanistic duties–and what happens when they go awry.