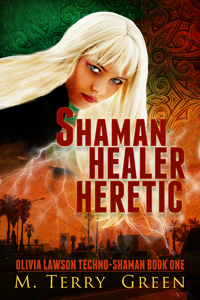 Even for a techno-shaman, a kachina in the bedroom isn’t exactly part of the drill. When Olivia Lawson wakes to find one towering over her, she panics. A Hopi god visiting the real world isn’t just wrong–it’s impossible.

Soon Olivia learns that the kachina is the least of her worries. As she struggles to save her clients, clashes with other shamans, and fends off the attacks of real-world vigilantes, Olivia finds herself in the destructive path of a malevolent ancient force intent on leaving the spiritual realm to conquer this one.

Left with few options, Olivia is forced to defy centuries of shaman prohibitions. As she and her allies risk everything in their bid for survival, Olivia ultimately learns that the rules are there for a reason and that breaking them has a terrible cost.

“This book has you asking “What?” on every page — but in a good way. …Livvy, SK, and the shaman culture are interesting. This book could easily open a fresh new world of urban fantasy.” – Publishers Weekly

What Readers Are Saying About Shaman, Healer, Heretic:

Unpredictable, un-put-down-able, and addicting debut of unexplored but fascinating shaman world, Green’s story is masterfully structured, perfectly woven together, and perfectly paced. She adds just enough shaman culture into the mystery of the lethal kink in their multiverse.

I just finished “Shaman, Healer, Heretic” – the first book in the Techno-Shaman series by M. Terry Green. I LOVED this book! It was unique and different from everything else I read in Urban Fantasy so far. I’ve read a lot about vampires, ghosts, shapeshifters … you know… the usual – but a techno-shaman that uses technologically enhanced goggles? How cool is that?

Began reading this just as a way to pass the time. Ended by staying up too late just to get one more chapter.